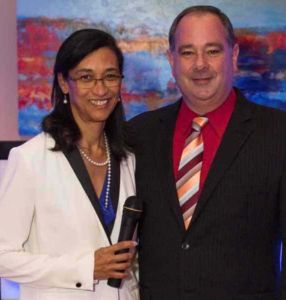 Tom & Carol are a husband and wife team originally from Philadelphia, Pa. Born and raised in Philadelphia, Tom worked as a full time police officer and also played sax in several bands where he would also Dj during their breaks. Carol sang with a show band and performed in many of the same places where Tom’s band did, which is also how they met. While still performing from time to time, Carol took a job in hotel management, and spent over 15 years in the Hospitality Industry.

After marrying Tom and moving to Philadelphia, Carol released two CD’s and had the opportunity to open for top reggae musicians, such as Maxi Priest, Inner Circle, Marcia Griffiths and Beres Hammond to name a few. In 2009, they moved to SW Florida with their 11 year old daughter Danielle and began working as full time entertainers.

While Tom concentrates solely the music and sound, Carol serves as the Master Of Ceremonies and Event Coordinator. Need a Party Motivator, no problem, thanks to her entertainment and hospitality background, Carol will lead your guests to the dance floor and even teach them a group dance (cupid shuffle, cha cha slide) while still maintaining a professional yet entertaining atmosphere.

“Tom and Carol did an amazing job at our wedding! From start to finish they made the whole process seamless and enjoyable. Truly exceptional customer service and professionalism. Music was spot on catering to all guests, everyone had a blast! Thank you so much for everything.”

Join Over 1,000 Happy Customers that have enjoyed A DJ With Class

Have your event be remembered as being one of the greats!